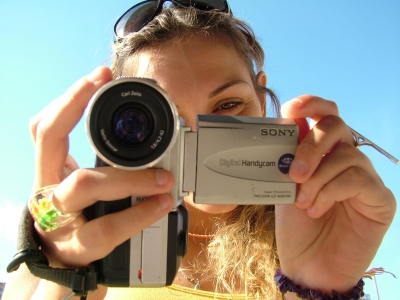 Okay, so a while back I made a video that was one of those “talking head” videos where you are simple speaking directly to the camera. I sent the link out to one of my lists.

..And I said in a follow-up email that video should be a big part of marketing and you should start making videos to increase your circle of influence and inform people as to what you’re all about. Brand yourself etc..

Let’s face it, video is a great way of communicating with massive numbers of people on a very personal level.

I received an email back shortly after from a woman that basically said, “Well, easy for YOU to say. You are already comfortable making videos. I am TERRIFIED to get in front of the camera. No way!”

It was that email that took me back a few years to when I was first starting out, and I was making videos… or at least “trying” to make videos. I have watched some of my early videos and admittedly they were awful.. poorly put together, poorly edited, and I looked like a bit of an idiot!

BUT.. they got better over time and I was thinking about WHY they got better and how I managed to put together a decent video that communicated my message to the people I was targeting.

It all came down to one thing: I wrote EVERYTHING down that I wanted to say.

Seriously, though. When I say I wrote everything down, I mean I scripted out every single word, and every single pause that was going to happen in my video.

Everything was completely scripted.

Even the intro where I’d say “Hey it’s Geoff here from xyz company, and I want to …..”

Now, I have to tell you that my writing style has a lot to do with how this works. When I blog, as I write I HEAR myself reading what I’m writing OUT LOUD. Which makes it read very conversationally and not just “here’s the facts”. In my head I’m explaining the information (whatever it is), and when I write it comes out like that.

Just like I’m doing now.. I’m hearing myself SAY what I’m writing to you. Understand?

When I make videos, it’s the same thing.

First I write everything that I’m going to say in that “conversational” voice.

Then I actually read it back to myself OUT LOUD so I can hear what it’s going to sound like.

After doing that I know what I have to edit to make it sound better and more natural when I actually do the video.

At least that’s how I did it when I was starting out. These days I can just write down in point form what I’m going to say and then fill in the spaces. But when I want to make sure I get my point across completely, nothing beats scripting out the whole thing and going through those steps I mentioned above.

So if you’re terrified of making videos or even audios.. that is my advice, simply script it all out and read it back in your OWN voice. If it doesn’t sound right, change your script and then read it back again. Repeat until perfect! 🙂

That’s how I did it. Hope this helps!

Thanks, have a great day.