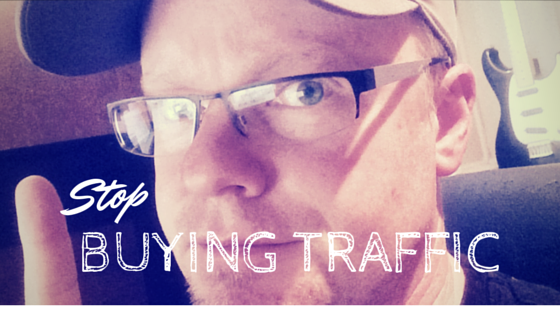 Here’s a bit of a mind-set shift for you that will help your business immensely.

“But, Geoff, I need to buy traffic to get people to my affiliate links.. and I need traffic to make sales… don’t I?”

Of course you need traffic…

Here’s what I mean..

Instead of thinking about just going out and buying hits from some traffic vendor because it was “cheap” and their site was pretty, don’t think “I need to buy traffic”, think of it this way..

Instead of buying traffic:

You need to control as much of the process as you can, right from the start, so you can have more control over the results.

Focus on buying advertising that will generate targeted traffic to your links.

When you think of it this way it forces you to focus more on where your traffic is coming from (ie. Market research, targeting) because that’s where the conversion starts.

Most of us know there are thousands of sources for buying traffic out there, and 99% of them will send you garbage traffic that doesn’t want anything to do with what you’re selling. That is a fact I learned early on in the game (years ago).

Sure some of them are cheap, and you might think, “Well, at least 2 or 3 of those people MUST want what I’m selling, right?”

And you get what you pay for.

It’s like trying to sell tickets to a baseball game in Detroit, to people that live in Africa.

(Nothing wrong with people in Africa, of course, but I’m pretty sure they’re not interested in Detroit Tigers tickets)

It’s called marketing. It’s what we do.

You may have the best product and sales page in the business, but if you don’t know exactly where your traffic is coming from, buying traffic is not a “short cut”, it is pointless and a complete waste of your hard-earned cashola.

Again, buy “advertising” that generates traffic for you.

Think about that and let me know what you think in the comments below..